Comprehensive review of South Beach Tanning Premium Self Tanner. See what real experts and actual users have to say about this self tanning product. 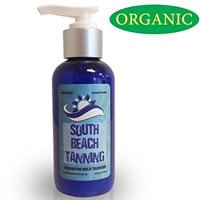 After trying out South Beach Tanning Premium Self Tanner, I gave it 2 out of 5 stars.  I didn’t like too much about it, except the price point is decent and it doesn’t stain anything.

The color was very light, more of a gradual self tanner.  But the bottle is so small, if you use it like a gradual tanner, it won’t last you very long.

The smell is light, but not pleasant.  It smells like sour coconuts, and by the next morning, it smelled like DHA (gross).

It also took a very long time to apply, due to the face that it didn’t blend in well.  It stayed white on my skin for around ten minutes, all the while I was rubbing it in.  Talk about annoying!

So overall, I don’t think I’d recommend this self tanner and I think there are better ones out there.

This self tanning lotion is white in color and is slick in texture.  It’s a little thinner than most lotions out there, but it’s not runny or watery at all.

I thought applying this lotion was going to be easy peasy because it’s white, so there’d be no mess.  But it ended up being extremely difficult to blend in.  It looked like white sunscreen all over my body, and it took about 10 minutes to fully blend in.

I found it to be very tedious to apply, and I had to use some real elbow grease to blend it in.

I didn’t use a tanning mitt, but it may have helped to blend it in a bit faster.

South Beach Tanning Lotion took around 20 minutes to dry, which is pretty average.

While it dried, it felt a little bit sticky, but that pretty much went away after 20 minutes.

This self tanner has a pretty light smell, but it’s an unpleasant one.

The light scent smells like sour coconuts.  I usually love coconut scents, but this one just smells off.

Smell (After Several Hours And The Next Day)

After several hours, the sour smell became more prevalent. By the next morning, it had your typical self tanner smell and I couldn’t wait to shower it off.

I was let down with how light my tan was from this product.

It’s definitely more of a gradual self tanner, just based off how light my tan was.  After one application, I was maybe one shade darker and had a super light (almost non-existent) tan.  If this is indeed a gradual tanner (it doesn’t say it is), the bottle is pretty small to use a few times a week.  It won’t last you very long.

I wish my tan would’ve been a few shades darker, but instead it ended up being very light.  I didn’t notice any streaks or patchiness with this tan, which was a small bonus.

How Long It Lasts

My light tan lasted about one day before it faded.  As it faded, it looked pretty natural; it was hard to tell when it was completely gone as it wasn’t dark to begin with.

No.  I think there are better self tanners out there, even if you’re looking for a light tan.