You are here: Home » Blog » Celebrity Self Tanning » The Golden Tan: An Award Show Make or Break

The Golden Tan: An Award Show Make or Break 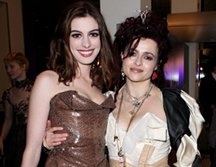 Between the People’s Choice Awards, the Golden Globes, and the Oscars there are three things that I am certain of.

Keeping a sun kissed glow for four months straight during awards season sounds pretty exhausting, don’t you think?  Reaching every nook and cranny, crease and fold is a hard job.

But for the sake of “Best Dressed” someone’s got to do it.  Spray tanner to the stars, Jimmy Coco, says it starts with a body enhancing air brushed tan.  These tans do more than lend a healthy glow.  They can add muscle definition where none exists.

“If they haven’t quite been to the gym, I can make it look as though they have,” he says.  “I give them an even glow and lightly etch in where the muscle is.”

Okay, I know what you’re thinking.  A few applications of sunless tanner and you’ll have arms like Angelina Jolie.  If only it were that easy.

Let’s take a look at a few celebrities who made the ultimate amateur mistake that landed them on The Worst Dressed List.

Critics felt otherwise, saying that her pale skin and light grey dress completely washed her out.  C’mon Amanda, you’re better than that.  If I was Oscar de la Renta I would have spray tanned you myself.

Anne Hathaway:  her dress has taken on many nicknames such as-the nipple dress, a shiny pair of scissors, and a horrible mistake.  Stylists concluded that her pearl white dress and pale porcelain skin did anything but compliment each other.  Ouch, but let’s be honest, critics–shmitics, she practically swept every category she’s been nominated in, including Worst Dressed.

Unlike Amanda Seyfried, there were many things wrong with Annie’s choice, but perhaps a nice sunless tan would have helped people see past her pointy nipples.

So what have we learned?

Now, I’m not saying that everyone on the worst dressed list could have been saved by a beautiful bronze glow.  For example, Helena Bonham Carter has been a lost cause since her role in Fight Club back in 1999, not even a tan could help her case.  (But it’s not a bad place to start).

If we can learn anything from these star studded mishaps, it’s that a sunless tan is the best accessory and could very well be the extra effort that grants you the title “Best Dressed”.

Did I miss anyone?  Who else do you think could have saved themselves with a good tan?

Emily Andrews is the Editor-In-Chief of SelfTanning.com. As you can imagine, Emily loves anything and everything having to do with self tanning! She's also a big fan of shopping (duh), tiny Yorkies and football.
« Fake Bake Original Self Tan Lotion Review
ModelCo Super Tan Instant Self-Tan Review »