You are here: Home » Blog » Facts About Self Tanning » Who Started The Sunless Tanning Craze?

Who Started The Sunless Tanning Craze? 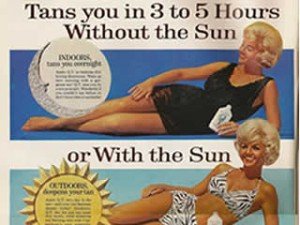 I am an avid fan of the show Shark Tank…..I also love the show Half Ton Teen (but that’s a different story).

What I love about it, is seeing how these inventions are thought-up and created.

My boyfriend, however, hates watching the show…. but that could be my fault because every episode he has to hear me gasp “Why didn’t I think of that?!” at least 10 times.

I was touching up my sunless tan the other night while watching Shark Tank and thought “Who is this Mastermind, this genius who invented self tanner?”

And why didn’t I think of that?!

So, I did some research on the topic.

In the 1920’s fair skin in America was widespread.  It’s rumored that a “suntan” only became popular when Coco Chanel came back from vacationing in France sporting a dark skin color and beautiful glow.

Does it really surprise you that Coco would be the inspiration?

Around this same time is when DHA (dihydroxyacetone) was discovered by a German scientist.  They had no intention of using it for beauty until it spilled on someone’s skin and voila it turned brown.

It wasn’t until the 1960’s that Coppertone introduced the first ever “Quick Tan” sunless tanning product.  It was advertised as a lotion that makes you “tan overnight.”

A decade later in 1973 DHA was approved by the Food and Drug Administration as a safe cosmetic ingredient.  And that, my friends, is how DHA sunless tanning products came to fruition.

Can you imagine how it would have been if Coppertone Quick Tan sunless tanner was on Shark Tank?

I envision Mr. Wonderful playing down the impact this product will have on the future.  Maybe he wouldn’t have been interested at all. But the QVC lady would definitely have been all over the opportunity to launch Coppertone QT on QVC.

Thinking back to the 1960’s, I wonder who would’ve been on the Shark Tank panel…

Here are my nominees for Shark Tank 1960:

Back to the sunless tanning craze…

Everyone knows self tanning products have grown leaps and bounds since the 60’s and are picking up even more steam.  It is now a $609 Million dollar industry and growing by double-digit percentages every year!

Even celebrities like the Kardashians are launching a self tanning line to try and get a piece of this multi-million dollar pie.

So what do you think of the sunless tanning industry and where it’s headed?  Do you have a product you absolutely love?

Let us know by liking, sharing, and tweeting this post.

Category: Facts About Self Tanning

Emily Andrews is the Editor-In-Chief of SelfTanning.com. As you can imagine, Emily loves anything and everything having to do with self tanning! She's also a big fan of shopping (duh), tiny Yorkies and football.
« Sun Labs Tan Overnight Self Tanning Lotion Review
Million Dollar Tan Cabana Tan Sunless Tanning Lotion Review »