You are here: Home » Blog » Do Celebrities Look Better After Self Tanning? » Would You Buy A Self Tanning Lotion From This Person?

Would You Buy A Self Tanning Lotion From This Person? 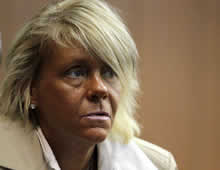 Tanning Mom, Patricia Krentcil, will now be adding “self tanning lotion” to her list of accomplishments.

It only seems fitting that she would be from a town called Nutley, N.J.  She definitely ranks high on my list of “Nut Jobs” coming in a close second behind O.J. Simpson who was promoted to #1 after he got away with murder and then arrested for theft.  Winner!!

In case you need a refresher on how this woman came to fame here are the cliff notes:

May 2012: Krentcil, 44, was arrested and charged with second-degree child endangerment after a school nurse noticed a rash on Krentcil’s daughter, Anna, that the child said was from going tanning with her mother (What a Tattle tale!).  The school notified child services and Krentcil was taken into custody.

After posting a $25,000 bail she was banned from tanning salons and booked for the Today Show.  Even Saturday Night Live did a sketch about Tanning Mom.  So jealous!

Note to self, call Tanning Mom to find out how I can make it on SNL.

And now, one year later, Tanning Mom has relocated to London where she says she “books a lot of modeling jobs” aka is the face on the sun damage warning pamphlets you get at the dermatologists.

The Tanning Mom has partnered with skin guru Dana Ramos to launch a line of self tanning lotions dubbed Real Tan Mom Healthy Glow.  This product is set to hit the market summer of 2013 (I’m not sure yet if it’ll make our list of the best self tanners— we’ll see when it comes out :)

And although the obvious choice for the proceeds of this product would be to benefit burn victims, the proceeds made will go to helping pay off the thousands of dollars Tanning Mom owes in legal fees.

Krentcil admits to frequenting the tanning salon up to 20 times per month when she was in her prime.

Now that is commitment.  I don’t even go to the gym 20 days a month.

But since working on the self tanning product line- she has been restricted to only natural sun exposure.  Dana Ramos and her team of skin care professionals have been working ruthlessly on replenishing Tanning Mom’s complexion.

Although she’s gone to great lengths, including cosmetic surgery to makeover her skin, at this point I still can’t tell if this leather couch is poking my butt or I’m sitting on Tanning Mom’s face.

Regardless, my nomination of Tanning Mom for Mother of the Year still stands.

Are you going to try Tanning Mom’s new self tanning lotion?

Do you think her complexion makeover will help boost her image?

Category: Do They Look Better After Self Tanning?

Emily Andrews is the Editor-In-Chief of SelfTanning.com. As you can imagine, Emily loves anything and everything having to do with self tanning! She's also a big fan of shopping (duh), tiny Yorkies and football.
« 3 Self Tanning Tips Sure to Boost Your Tanning Experience
Sun Labs Tan Overnight Self Tanning Lotion Review »